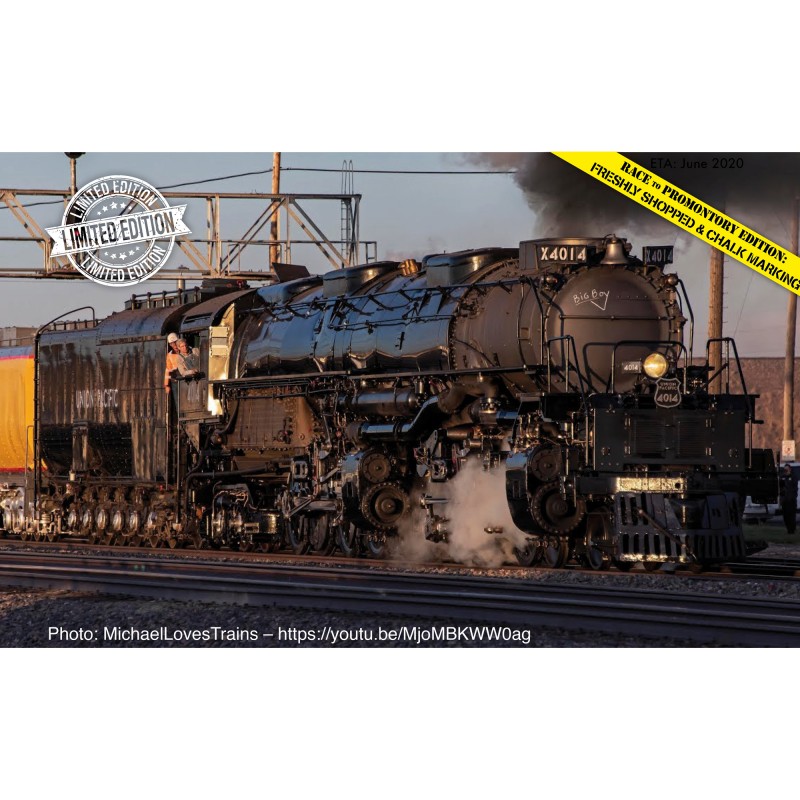 SURVIVING 4-8-8-4 BIG BOY PRESERVATION INFO:
4004: Holliday Park
4005: Forney Transportation Museum
4006: Museum of Transportation
4012: Steamtown National Historic Site
4017: National Railroad Museum
4018: Museum of the American Railroad
4023: Kenefick Park
PRESERVATION VERSION FEATURES:
As delivered from ALCO in service 1940s era
Coal Tender
Twenty-five Big Boys were built exclusively for Union Pacific Railroad, the first of which was delivered in 1941. The locomotives were 132 feet long and weighed 1.2 million pounds. Because of their great length, the frames of the Big Boys were “hinged,” or articulated, to allow them to negotiate curves. They had a 4-8-8-4 wheel arrangement, which meant they had four wheels on the leading set of “pilot” wheels which guided the engine, eight drivers, another set of eight drivers, and four wheels following which supported the rear of the locomotive. The massive engines normally operated between Ogden, Utah, and Cheyenne, Wyo.

There are seven Big Boys on public display in various cities around the country. They can be found in St. Louis, Missouri; Dallas, Texas; Omaha, Nebraska; Denver, Colorado; Scranton, Pennsylvania; Green Bay, Wisconsin; and Cheyenne, Wyoming.

Union Pacific wanted something that could make the same speeds as the Challengers but could carry the entire 4,290-ton train over the Wahsatch Mountains without a helper. The easiest solution was to scale up the successful Challenger design by adding another pair of drivers to each half of the locomotive thus making a 4-8-8-4.

In 1941 UP placed an order for twenty 4-8-8-4’s, numbered 4000 through 4019, with the American Locomotive Works. Each engine cost $265,174. According to legend an unidentified machinist at the ALCO plant is responsible for the name “Big Boy”, having scrawled the name in chalk on a partially completed locomotive.

The Big Boys were exactly what the railroad wanted. They were coal burners with 68-inch drivers, 135,375 pounds of tractive effort and 6,000 horsepower. They started service on the line from Ogden to Green River, Wyoming and their operating range soon increased to cover the line all the way to Cheyenne.

Traffic during WWII resulted in five more Big Boys, numbered 4020 through 4024, being built in 1944. These versions were slightly heavier than the original order due to wartime materials restrictions.Despite the influx of diesel locomotives following WWII, the Big Boys and Challengers remained the prime power on the Overland Route. They also saw service as helpers, leading gas turbines and diesels over Sherman Hill. They remained active through the 1950’s and weren’t retired until the early 1960’s. By then the first twenty units had been run well over one million miles.
Specifications
DCC: Equipped
SOUND: Tsunami2
PROTOTYPE MANUFACTURER: ALCO
WHEEL CONFIGURATION: 4-8-8-4
LIGHTED: LED Lighting
FULL ROADNAME: Union Pacific
MIN. RADIUS: 22 inch
Minimum Age Recommendation: 14 years
Is Assembly Required: No